Day #3 of the 2018 Bang Bang BBQ Tour had lunch take me to the Forest Park area of St. Louis just west of downtown. Tucked in the middle of Delmar Blvd, Salt & Smoke is fixed at the corner next to a statue of Chuck Berry!

Salt & Smoke was a really neat and trendy place. Outside it’s a typical storefront look with a bright yellow canopy so it stands out some. Inside it’s a modernized and contemporary restaurant. Wood floors and an array of wall coverings from painted plaster/drywall, chalk board paint, cedar planks, and a really cool crate storage wall structure. The lighting was alright…we went on a very sunny day so it was very well lit inside. When some clouds would get in the way of the sun it got a little dark but nothing too crazy. A very nice selection of bourbons and wines were on a very cool looking shelf above the bar. 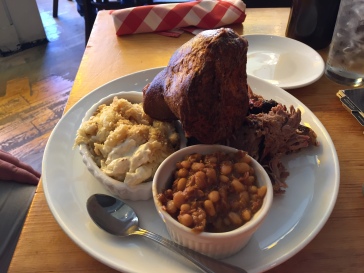 The menu at Salt & Smoke is a very well balanced menu with a big emphasis on BBQ and smoked meats. I ordered a 2 meat plate with two sides and ordered the brisket burnt ends and pulled pork with sides of baked beans and mac n cheese. My friends ordered a pulled pork plate with the same sides and a 2 meat plate of chicken wings and ribs with the same sides as me. Each entree came with a bacon & cheddar roll or “popover” as they call it. We also ordered an appetizer of deep fried chicken skins with a side of honey mustard.

We finally found a BBQ joint that delivered the food on actual plates!!!!! I think the very first thing you notice when the entrees come out is the size of the popover. It’s huge! Typically put in the middle of the plate it does tend to hide the rest of the contents of the plate. A simple move to the left or right and you get a beautiful plate of smoked meats and side dishes (sides also in actual dishes and not styrofoam cups). The pulled pork and the burn ends had a nicely noticeable smoke ring. The baked beans were lighter in color than the last few places we visited and had a fairly unique flavor. The mac n cheese is actually shells and white cheddar cheese vs. yellow cheddar. It also has a breadcrumb crust which I think is some of the popover remnants.

Flavor wise, let me first start with the deep fried chicken skins. FLAT…OUT…AWESOME! Pretty much the number one thing my mom told me not to eat growing up when we ordered fried chicken is the very thing that Salt & Smoke drops into the fryer and pairs it with a tangy and sweet honey mustard sauce. Fried to a crisp, these guys have the texture you want from something fried and the tasty flavors that comes with chicken skins.

Let me talk about the meats now. The pulled pork was really great. Definitely one of the best pulled porks I’ve ever had. I never needed to sauce the pulled pork. The meat was tender, moist, and juicy. Very balanced smoke flavor and subtle hints of sweet, heat, and savory. The burnt ends were juicy and tender. A little larger cuts than expected but each cut was jam packed full of flavor.

The mac n cheese was hands down one of the best I’ve ever had. I liked the move to use shells vs. standard macaroni noodles. It was also really awesome to use white cheddar vs. traditional yellow cheddar. The dish was super creamy. Paired with the breadcrumbs on top with some char to them provided a really great texture in every bite. Something gritty to start, creamy in the middle, and soft/tender in between. Deliciousness in every single bite.

The baked beans weren’t as dark as other baked beans we’ve had on this trip and they had a very distinct taste. Unfortunately, it wasn’t one that really jumped out as good in my opinion. It was almost like the beans were trying to be every single flavor possible. There were hints of savory, lots of sweet, lots of smoke, and it felt very unbalanced. Could’ve just been a bad batch or just something my taste buds didn’t enjoy.

Overall, Salt & Smoke is a mighty tasty joint in a very modernized and trendy part of the city. Great smoked meats that are juicy, tender, and flavorful. Sides, for the most part, that are excellent. A place that goes above the traditional and merges it with a modern yet classical feel. A must visit if in the St. Louis, MO area.

Happy Mother’s Day! Took my mom, dad and cousin to @oceanprimeindianapolis for lunch today and I enjoyed a greatly cooked filet Mignon, roasted brussel sprouts, truffle Mac n cheese, candied bacon and a peanut butter chocolate pie. It was delicious! The staff did a great job and even though we had a small spill on my new spring suit they offered to cover my fry cleaning so kudos to them for that. Check ‘em out sometime!
I’m adding something new to my small group catering menu: BBQuterie Boards!
Visited some family in Cedar Rapids, IA for work and took them to @sugarfirecr and it was great! I went to the original one in STL and it was good but this time around the food was 🔥🔥🔥! Got a three meat plate of pulled pork, Turkey and brisket with baked beans and slaw. Brisket was awesome, juicy and smokey. Pulled pork was tender and smokey. Turkey was moist, smokey and delicious. Beans were amazing and I loved the mixture of the kinds of beans they used. Coleslaw was fresh and creamy and a nice balance to everything. The icing was the great staff there that were giving away pie slices as the restaurant was closing so a free slice of chocolate pie was yummy! Definitely check them out if you’re near one of their locations!
Finally visited @i_tre_mori in fishers after church today and sampled some of the napolitan pizzas. They were across the board really good but I kid you not, hands down probably the absolute best pizza crust I’ve ever had. The Italian sausage was great and had a little bit of heat to it. The cheese was great and the toppings were fresh. The “Roberta” was my favorite pizza i sampled today. Go check them out at 106th and Lantern! #indybbqguru #napolitanpizza
An absolutely AWESOME burger for lunch today at @moontownbeer ! It’s amazing how the “simple” things can be so satisfying. Double bacon cheeseburger on a sesame seed bun with fries…CAN’T GO WRONG! Juicy and delicious beef patties with the perfect balance of toppings. Crispy French fries is a must when getting a craft burger…can’t overlook the side dish and fries must be CRISPY! No soft and soggy fries. I paired it with my favorite brew aka the Cecil and it’s an excellent meal and way to kickoff the weekend!
Renovated and reorganized the outdoor kitchen today! Added a block pit grill and truly made it 100% kitchen vs. 50% kitchen and 50% seating. The seating will be at the patio by my house. I absolutely LOVE the new flow of the outdoor kitchen and can’t wait to have some cookouts! Equipment includes (2) @webergrills WSM’s, (1) @webergrills kettle, (1) barrel grill, (1) trailer big smoker and grill, and (1) block pit grill.