Lunch today took us to downtown Knoxville, TN to Sweet P’s BBQ. Me and my friend Ryan passed through Knoxville on our East Coast BBQ Tour in 2015 and had a really good experience at Dead End BBQ. Since I had already revisited a place on a previous tour (Jim Neely’s Interstate BBQ) on this tour, I wanted to try something new and Sweet P’s BBQ came up on a lot of lists of people’s favorite BBQ joints in Knoxville.

You order at the counter at Sweet P’s and they assemble your plate in front of you. One thing I thought that was really unique to Sweet P’s vs. other BBQ restaurants I’ve been to is they apply a finishing rub to all their smoked meats. The meats appear to be smoked low and slow and not sauced but finished with a fresh application of their house rub. The finisher rub really makes the meat pop on the plate which is always good. The mac & cheese has some of the charred top in it which adds a nice visual color change. The pinto beans were OK to the eye and looked like beans. They were out of the “greens and things” that I was really hoping to try. The cornbread comes already cut and saran wrapped along with the bacon chocolate chip cookie. You could see the bits and pieces of bacon in the cookie though so that was appealing to the eye. The burrito is wrapped in foil so no seeing the finished product until you roll it out. 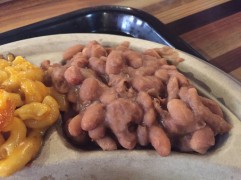 Taste wise, big fan of the chicken quarter, mac & cheese, and the burrito. The chicken was smoked perfectly and had a very balanced flavor of smoke and the rub and best of all, CHICKEN! Chicken is a tough meat to BBQ as it’s easy to lose the flavor of chicken with all the rubs and sauces that people add to it but Sweet P’s lets the smoke & the rub compliment the natural flavor of the chicken. The chicken was also really moist & tender. The skin though not bite through like a competition was really tasty when I ate it. The mac & cheese was delicious and dreamy! The noodles had a really good chew and the cheese mixture was really creamy. You could eat the mac & cheese with either a fork or a knife and you would’ve been able to get a really good bite. The burritto was simply a BBQ plate wrapped up in a tortilla. It had a really “explosion” of flavor from the smoked meat, the beans, the slaw, and the BBQ sauce all conglomerating together into a single bite and it was really good. 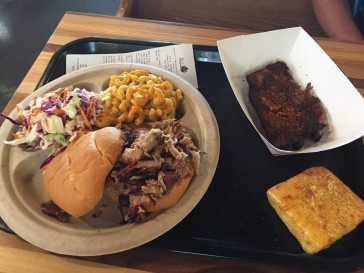 The pinto beans I wasn’t a big fan of. They seemed a little dry but they were a little smokey so that was something going for it. The cornbread I could’ve done without. It was very dry and no butter around…probably just a bad batch but it wasn’t appealing for me. I had high hopes for the bacon chocolate chip cookie but it ended up tasting mostly like a chocolate chip cookie. There were some subtle “salty” enhancements I think from the bacon pieces but I was expecting a little bit more bacon flavor than what I got.

All in all, Sweet P’s BBQ in Knoxville, TN was a great visit and you should visit it too if you’re in town. They have a cool looking chalkboard menu and a great “part of the neighborhood” feel and the food backs it up.