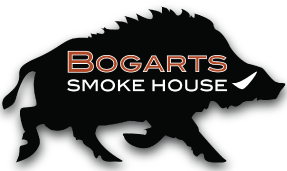 The first dinner of the 2018 Bang Bang BBQ Tour took me to the south side of St. Louis, MO which appears to have gone through some recent renovations and looks to be turning the neighborhood around. Reminds of the recent redevelopments of Fountain Square and Irvington districts in Indianapolis. Bogart’s Smokehouse is a fairly new place but has become a staple of solid BBQ in St. Louis.

Located in the subdistrict of Soulard in St. Louis, Bogart’s Smokehouse is the real deal when it comes to BBQ. Taking up a corner lot in the heart of the district with a bright yellow and white painted trims on the exterior you can’t miss this place. Inside you see a lot of decorations of the city of St. Louis and a lot of history of the city which was really cool. Props to the manager when we visited as he took us to the back of the restaurant to see the cookers: Southern Pride BBQ Cookers. Great pits. Propane heat but still wood smoke capable. 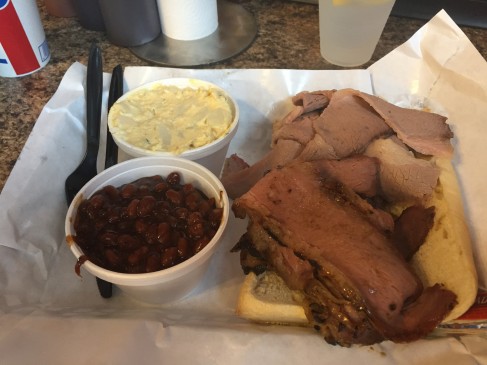 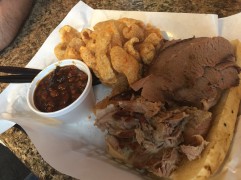 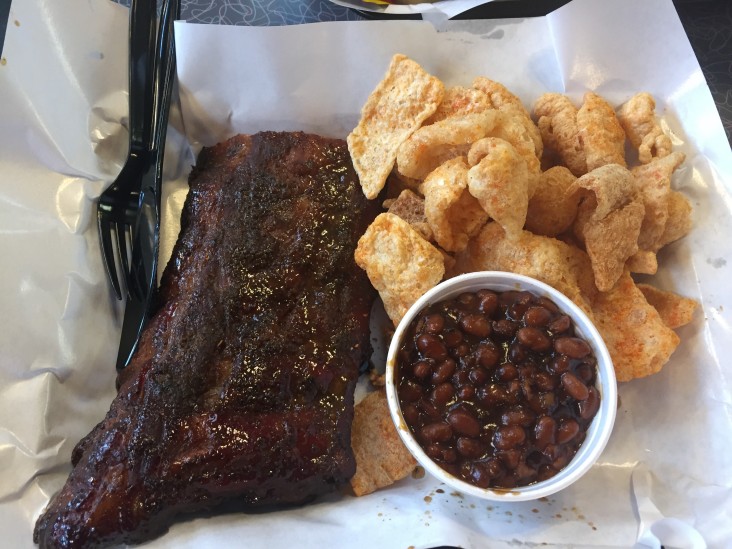 The food is served in plastic basket with wax paper again. A typical staple for a BBQ joint, but I’d still like something a little classier but regardless. First look at my plate and my first thought is “that’s a lot of meat!”. A good thought to have when eating BBQ and looking down at a plate. As I investigated a little bit more I was pleasantly surprised with the beef brisket. If you can’t tell from the pictures above, the brisket was cut pretty thin which is usually a trade secret that the brisket was undercooked. The brisket slices were actually very tasty and flavorful. I didn’t really need any sauce on the brisket slices as the beef and salt and pepper spoke for itself with a good complimentary amount of smoke. The smoke wasn’t as visible as I’d like to see on  brisket but it was able to be tasted. The tri-tip was also thinly sliced but did need some sauce to really enjoy it. The ribs were pretty tasty as well. A little too tender for my liking as they were near fall off the bone. Very balanced flavors typical for the STL area. Nicely noticeable smoke ring on the meat once I bit into the rib.

The beans at Bogart’s are AMAZING! Probably some of the best smoked beans I’ve ever had. Little bits of BBQ in it and a good balanced amount of brown sugar and other spices brings the baked beans to a smokey and sweet and traditional balanced flavor. The potato salad was good, but I would’ve liked to have had more eggs in it. The pork skins were flavorful too.

Besides the plastic basket and wax paper presentation, only a few things could’ve made this dish over the top. The pork cheeks could’ve been served warm. They appear to have come from a bag but I’m assuming they fried them in house. The tri-tip and brisket slices were too thin in my opinion but they made up for it with good flavor. I would’ve liked to have seen more evidence of smoke on the meat too. A little bit more egg in the deviled egg potato salad was expected but not met. Still tasted good though. I would’ve liked to have seen some desserts too.

Overall, Bogart’s Smokehouse was a great visit. Small, homey, and a part of the neighborhood community BBQ joint to the T! Delicious food and a good array of meats and tasty side dishes. Definitely worth a visit again!

The post says it all...I still love food and exploring all the many ways to cook it and enjoy it. I hope you will continue this journey with me on my personal account @giantfilipino and a few other things I’m really involved in like youth ministry, shooting guns, hiking, and other adventures that life brings me! #indybbqguru
It’s sous vide Sunday apparently! Thick cut pork chops, honey and harissa glazed carrots, and Mac & cheese from @kstin06 . This pork chop was moist, juicy, tender and DELICIOUS! #indybbqguru #sousvide
Deep fried chicken skins were crispy, salty, garlicky, and crunchy deliciousness! I had these first at @saltandsmokebbq in St Louis and they’re AWESOME! I’ll be deboning and removing the skin of chicken thighs moving forward (unless in a competition of course). Gonna try out different seasonings and dipping sauces next time. #indybbqguru #friedchickenskin
Ate lunch today after church at @joellashotchicken in Carmel. Tweeter hot chicken tenders, collard greens and sweet vinegar coleslaw. #indybbqguru #nashvillehotchicken
Corned beef hash Easter brunch special at @murphyscrafthouse today was AWESOME! #indybbqguru #cornedbeefhash
Fired up the big smoker and cooked up quite the smoked meat plate! Pork baby back ribs, pork country style rib chunks, beef tri tip, and chicken thighs. #indybbqguru #smokedmeat #ribs #tritip #chickenthighs #yummy #tasty #lowandslow #bbq